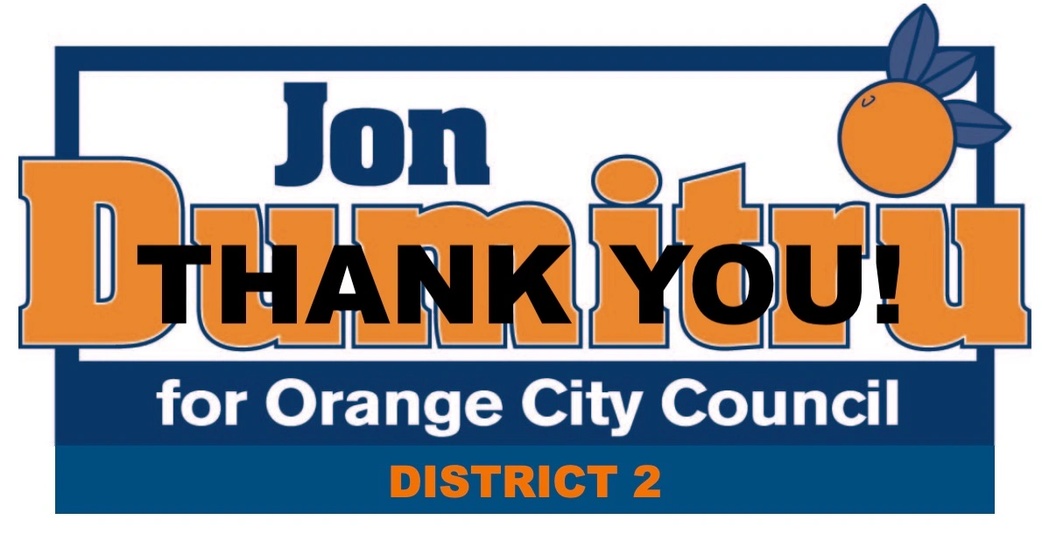 Born at Chapman Hospital and raised on Sacramento Street, he now resides in DISTRICT 2 of the City of Orange. Most of the Dumitru family also live in Orange (District 1-Old Towne and District 5-West of the 55 Fwy), and those not residing in the United States live in the southern European countries of Romania, Hungary, and Croatia.

Jon has been very involved in the community since he was a boy. He was in Boy Scout Troop 1475, and received the Eagle Scout Award in 1986, the highest award for youth offered by the Boy Scouts of America.

Jon attended all Orange Unified Schools as a youth and is a proud graduate of Orange High School ("Once a Panther, ALWAYS A PANTHER").

Jon has lived his life giving back to the community, and has been a strong advocate for the teachers and students of the school district. He was recently quoted as saying,

"My family, church, teachers, and friends over the years have helped me develop into the man I am today. I owe each of them a great debt, and will always work to give back to those who have given so much of themselves to help me succeed."

Jon is a strong supporter of Orange's public safety Departments (Police, Fire and Water), as evidenced by his career in the fire service with just under 30 years of service with the Orange County Fire Authority in the Emergency Command Center. He is responsible for receiving emergency calls for fire and medical assistance via 9-1-1; he then relays medical instructions. Jon's major duties also include coordinating firefighting and medical resources throughout Orange County. Jon has also been called upon across the western United States to assist on major wildfires due to wealth of knowledge and experience. Jon is also an advisor in Explorer Post 540 - Emergency Services. This organization trains youth and adults in emergency services such as CPR, first aid, and earthquake preparedness.

Committed to helping resolve local issues, Jon has gained a political experience by demanding parks, fiscal responsibility and open accountability. He believes strongly in government that protects citizens' rights and property and not one that abuses them. He is also very active on a state level, having worked for a number of issues ranging from fiscal accountability to local housing and transportation issues.

Jon has been recognized by local media a number of times, from fighting for the rights of Orange residents and their needs, to delivering a baby on Mother's Day, to saving a young girl with a gunshot wound, and chasing a car-jacker down and holding him for the local police.